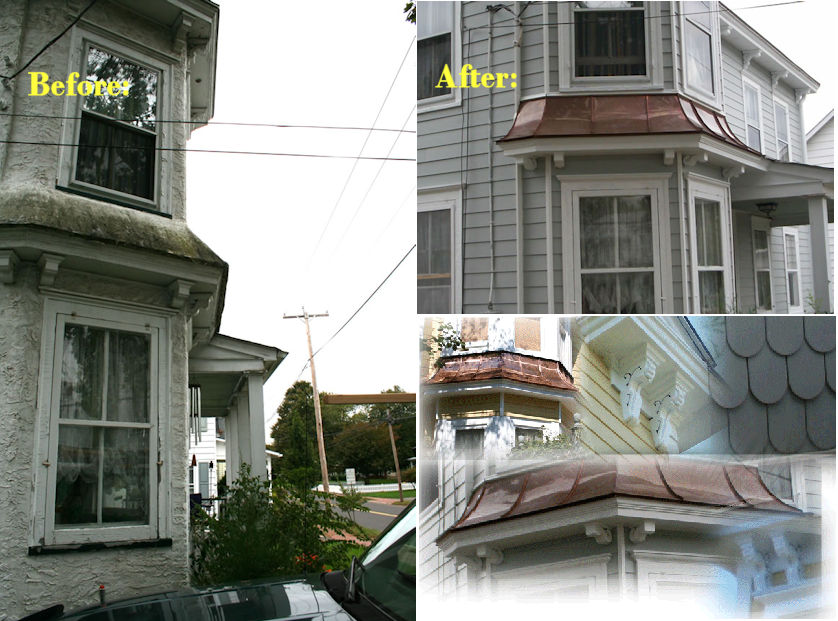 Do your fiberglass roof deck and the stucco wall work with one contractor.

Why is my Stucco Cracking?

Beware: Do not repeat the cycle and replace stucco with a leaking cladding that relies on UNDERLAYMENT!

Why is Stucco failing all over Philadelphia?

Stucco used to be a great exterior cladding system, but just like everything that is influenced by profit margins, shortcuts are devised to minimize labor and materials. It is not just a problem in Philadelphia, but industry wide.

To 'Remediate' is to make the situation better, right? The company should know and have experience and be able to call out the root cause(s) of the probem they intend to fix, right?

Yes, of course it is important to understand what went wrong in order to arrive at the right decision. If you have contacted a company to fix the problem and the first thing stated was that the UNDERLAYMENT or TYVEK was done improperly, give us a call now! Underlayment is not a primary cladding! Don't repeat the same errors all over again! Anyone who immediately looks to the underlayment as the cause of the issues is just not experienced enough to diagnose the problem and much less qualified to offer a lasting remedy.

3 Coat Stucco - Once the Standard

"Once upon a time" Stucco was a viable exterior cladding, Stucco was applied in layers or 'coats.' The initial 'UNDERLAYMENT' was asphalt saturated felt, known in the vernacular of the industry as 'tar-paper.' Even that standard has been compromised to a thin and seemingly worthless layer. Emphasis has been put upon UNDERLAYMENT for stucco because of the flaws in the 'primary waterproofing' cladding, which stucco used to be but is no longer. Stucco Underlayment has become the primary because with all of the 'innovations', stucco exterior cladding leaks! Yes, it is expected to leak! New age applicators are happy to wrap up the exteriors and cheat away on the cladding. Manufacturers are poised and ready to make, market and sell more Underlayment. Philadelphia: We say 'Stop the madness!'

The Scratch Coat: This layer is supposed to be a thin layer meant to 'adhere' and bond to the Wire-Lathe.
The Brown Coat: After a few days of cure, or partial cure, the second layer, the 'Brown Coat' was applied. About twice the thickness of the initial (Scratch Coat) adherence layer, this nominal 1/2 inch thick Brown Coat layer along with the partially cured Scratch Coat were left to cure for a period of time.
28 day Cure: This was the norm as the two layers bonded to each other and the applicator would watch and apply a mist to the surface if the cure was drying too fast. This cure time was crucial in establishing the structure that bonds to the wall.
Final Waterproofing Layer: This layer often holds the color pigment along with additives that give the outside of the cladding, a waterproof finish.

We used to have Real Stucco

This was a 3-layered masonry cladding system that one could count on to last for a lifetime or longer. It used to be reinforced with Chicken Wire, but then modern Wire-Lathe was engineered for the use in the application of Stucco. Mechanically fastened to the wall and over the underlayment was this wire that is specially formulated to hold the scratch coat. We will address underlayment just a bit later after we discuss the issues with the current state of the stucco cladding industry and how we arrived at so many failures taking place in the city of Philadelphia.

Above: Cut-away of Stucco with a Control Joint to limit cracking.

Above: Lateral crack in stucco in Philadelphia formed because of substrate swelling from leaks! Cracks can be a symptom or they can be a cause of the problem. Cracks that happen because of swelling of the substrate usually had their origins in poor flashing details. Cracks can also occur because of 2 coat systems that lack in structural integrity. You can read about that below.

So what happened? Several 'Innovations'

It wasn't good enough that the dirt, cement and lime were relatively cheap and that exteriors could be tough and long lasting. Manufacturers had to toy with the idea that insulation could be added along with underlayments to 'sell' new-age cladding options for the building industry.

EIFS took over for a while,

until entire walls of homes and buildings began to rot away from the leaks caused by the use of these, initially poorly designed systems. It is important to note that these systems were adopted by newcomers to the industry, as is the case with a lot of new products in the industry. These systems touted the underlayment as a significant element to the design. Drainage was not initially designed into the system, but it soon followed. A "drainage screed" was introduced at the bottom of the walls, but in the absence of a drainage plane, like that of Screen Walls made of brick, etc., the EIFS walls could not drain.

Still the emphasis on the underlayment,

more underlayment was pushed like a feel-good measure to ward off those bad leaks that plagued EIFS systems. The main initial flaw in these systems, other than the obvious lack of flashing at critical joints in the planes of the walls, was the use of OPEN CELL INSULATION. This EPS product was obviously cheap but it was just wrong to use this on the exterior of a building. Moisture destroys open cell insulation sheathing! So the systems were installed with open cell insulation over underlayment and then sealed over with very thin cement (and some fiberglass reinforcement for good measure) and flexible sealing layer. These systems broke down early in the life cycle, however many property owners were none the wise to it until things really went South. Entire walls rotted out. This was mainly due to the new crop of installers that didn't employ even the modicum of proper flashing details. Remember, as mentioned above the new and inexperienced installers are the first to embrace a new system or offering from a manufacturer. Building Codes just state that "In the absence of specifics in the code, refer to the manufacturer's specifications," as if that is guidepost for the industry. The door was opened that was hard to shut until the groundswell of complaints, lawsuits, etc. did common sense kick in to kick this stuff to the curb.

This was another bad idea that took root for a while until all the failures resulted in major damage and lawsuits. Open Cell Inslation should have never been used on the exterior of buildings.

Builders found that they could have their buildings cladded in two coats, instead of the traditional 3 coat stucco. The job looked the same and it costed much less to bring to the market. The problem was that with a thick base, cracks occurred early on. The structural layer that cured over time was missing! This was a hack of a good and viable system. It looked the same but without the Brown Coat and the cure time, stucco failed miserably.

Builders started to buy into the flexible top coat that arrived on the scene to answer the call of the cracks. Now what was being foisted onto the industry was a top coat that would move and stretch and protect the flawed, cheaper one-coat stucco that was missing its structural layer! Manufacturers rose to the occasion to provide superior coatings that could 'fix' the issues that resulted by the deviation from good building practice, the 3 layer stucco system.

Between the UNDERLAYMENT CRAZE and the 2 LAYER STUCCO, along with the HIGH R-VALUE INSULATION, the original concept of a formidable leak-free exterior was lost to this seemingly higher logic.

A great Exterior Cladding System was compromised for profit:


Sales of the Added 'R' Value, Increased Moisture Control and Cheaper Installation became more important that the delivery of a lasting product. These flawed systems have begun to show themselves. With the realization that these systems are often very damaging comes the decision to just get rid of it and start over.

The industry is a mess! We have been commenting on this for decades. When we look at viable replacements for stucco, let's not go down the same road that lead us to this point. Don't repeat the cycle.

Underlayment is not a primary waterproofer, water shedding layer unless the intended primary layer is deficient ot flawed in design or application.

Underlayments meant to be weather barriers do become vapor barriers under certain conditions and they do sometimes cause mold inside walls and roof assemblies.

Exterior Cladding should be your primary water shedding component and never should Underlayment be looked upon to save the structure! Look at what happens when Underlayment is relied upon as a primary! You cannot rely upon a band-aide under the cladding to stop leaks! Proper mechanical flashings are mandatory, but you first start with a product that does not leak! Watch the video that is just as valid for stucco or any other exterior cladding:

The Best Alternative to Stucco

Vinyl Siding We neither advocate, nor do we install Vinyl Siding because at it is illegal over 40 ft. and it relies heavily on underlayment as it is known to leak. Take a look at: The Vinyl Siding Weather Barrier Statement and the 40 ft. limit imposed by the manufacturers and this should tell you enough.

The old Clapboard style wood siding was also a great extrior cladding at one time. New Growth Wood now has made Wood Siding a relic of the past.

FiberCement Siding offers the true water shedding of Clapboard, while allowing the Walls to Breath and the permanence of a proven product. We have installed many Fiber Cement Sidng Jobs and we feel this is the best product for your home's exterior. James Hardie Siding is your answer. The details are most critical.

Head Flashings and Window Heads shed water away from the structure.

We have been installing James Hardie for decades and if you are tired of the problems associated with stucco, we have the answer. If you have a Fiberglass Roof Deck, you need a company that can handle your wall cladding and you roof deck. Don't get involved with multiple contractors. Stop the cycle!

Call us for an estimate today.

The Philadelphia Dream Deck had Stucco

on the Walls. We removed it and cladded

everything in one, contiguous membrane

Watch the video above.

The Subcontractors that create these problems are actually now in the business of fixing their own problems at your expense! DO NOT REPEAT THE CYCLE! The builders use these cheap subcontractors in the creation of the problems and now they want you to pay them again. You need an experienced company that stands behind their work. 10 Year Warranty on repairs.

Free Estimate link is below (in green).

Call an expert with many years of experience and get the straight story - the truth!